How B2B has changed, per McKinsey

McKinsey recently launched a survey of B2B decision-makers across 11 countries, seven sectors, and 14 categories of spend. We’re obviously very interested in this space, and our CEO Arnold has dedicated two recent newsletters to potential prospects to covering some of the changes in B2B partnerships and sales models.

McKinsey’s results included some of the following high-level trends:

The rise of self-service

We were initially going to write this post about indirect vs. direct sales channels, but the rise of self-service is an interesting trend line as well. Look at this: 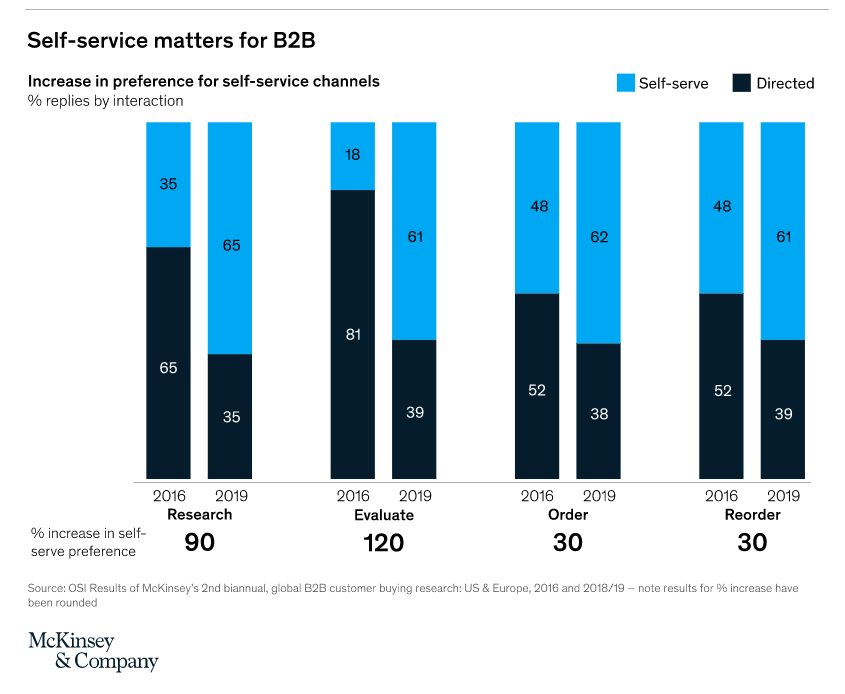 One interesting element here is that for years, the narrative was that people held different expectations for their business, professional purchases (B2B), and their purchases as members of their family (often B2C). That gap is shrinking.

Ultimately, buyers in both arenas want:

No matter what industry you’re in or what you do, isn’t that what YOU want?

It’s interesting to note that 33% of B2B respondents to McKinsey said that live chat was very important for a best-in-class provider in their opinion. Even 5-10 years ago, live chat was not something commonly associated with B2B; if anything, it was viewed as more of a nuisance by true B2B decision-makers in their buying and sales processes. Now it’s best-in-class. And think of what live chat provides: speed, transparency, and conveyance of expertise.

Responses have been mixed among B2B executives: 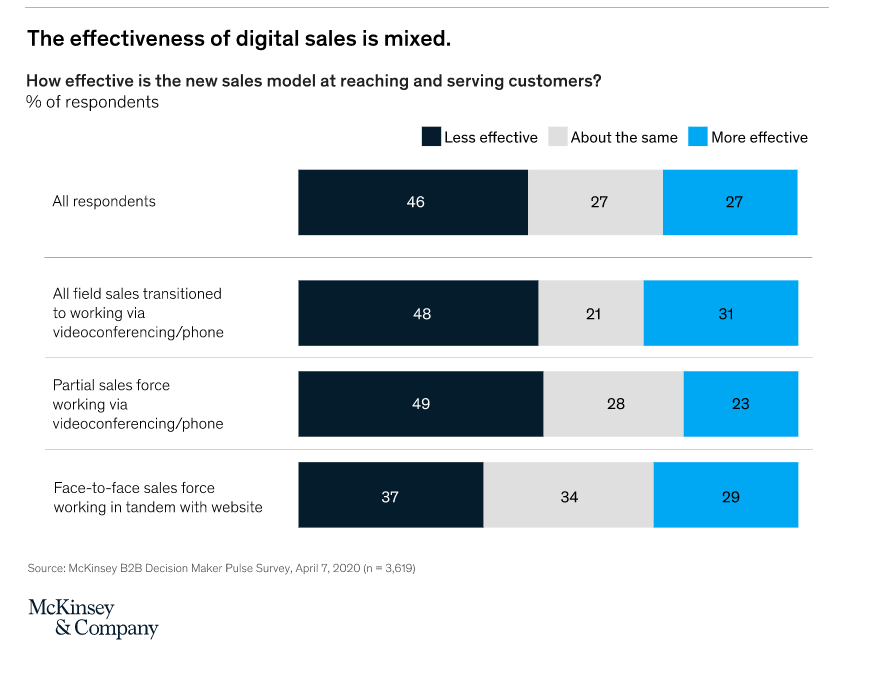 Most of these companies surveyed established multi-silo “nerve centers” to help with sales operations during a time of increasingly remote sales. At Conectys, we trained and re-organized people similarly with an eye towards customer satisfaction (CSAT) metrics but also sales, with multiple units working on business intelligence and tailored decks for prospects.

As McKinsey themselves note:

“The sharp rise in the use of digital and self-service channels means that companies need to be thoughtful not only about how to enable effective digital interactions but also about how to deploy their sales reps to best effect.”

Welcome to The New Normal, The Next Normal, or whatever you particularly choose to call it. The core tenets of business — establishing trust, delivering with speed and expertise and value — are the same, but much of the delivery approach is shifting more rapidly than we expected. We will see what 2021 and beyond brings, but be cognizant of these changes as they swirl around your business. And remember: many large global brands have already announced they’re not bringing people back until July 2021, so this will last for a while.

Check out some more relevant posts:

Outsourcing buyers are looking to gain access to some of the advantages of outsourcing in a more accentuated and formalized format: through the contract. Let's talk solutions! Some of the trends we [...]

Why do RPA projects fail?

Last week, we wrote about the best processes to consider for Robotic Process Automation (RPA) projects. We are currently working on RPA projects internally; the rollout to clients will come down the road, so while we have internal knowledge, we’re presenting [...]

There can, unfortunately, be a belief among executives that automation is a “silver bullet” that can solve numerous problems around process and cost containment. There’s some evidence that some jobs lost to COVID are going to RPA or Robotic Process [...]

How B2B has changed, per McKinsey McKinsey recently launched a survey of B2B decision-makers across 11 countries, seven sectors, and 14 categories of spend. We’re obviously very interested in this space, and our CEO Arnold has dedicated two recent newsletters [...]